>> My name is Richard Augustus Schrader, Mr. Schrader. I went in the service in 1951, October. Basic training into Rogero, about 16 weeks, and then subsequently, some of my friends went to Korea. I went to Germany. I did a tour in Germany. I returned home in, what was it, ’53, around that time. Two years later, extended for 1 year, serving Losey Field 296 Infantry. 296, I believe, was in Losey Field, Puerto Rico. Volunteered to go to Korea. They sent me to Oklahoma. At Oklahoma, volunteered to go to Korea. They sent me back to Germany.

>> Well, why did you volunteer to go to Korea?

>> Well, the thing is that when we got back in … It was around 1953, and we met … Those that went to Germany met in Fort Dix. I think it was Fort Dix, New Jersey, and then later on, we caught the ship in New York, and there came the Korean troops. My buddy that trained with me, in basic training, and talking about war, and I’m young. I said, “Wow. Sounds good.” So I decided to extend it for 1 year and Puerto Rico. “I’ll check it out,” but then other thing too, I guess I was fortunate, boy, but a gentleman my first … was my captain commander in Germany in my first tour. And later on when I went, I think it was around ’54 or so, I then met him in Oklahoma, but he probably was a National Guard type when he came in and probably didn’t renew his category. Now he was a first sergeant. I ascended, and I went to. I right away recognized American, I said, “What are you doing? Why?” “I’m going to Korea.” “Okay.” A couple weeks later, I find myself and others back to Germany. I guess he was looking out for me. Right.

>> Well, because, you know, a lot of Americans died in Korea.

>> So God was looking out for you too. Well, let’s talk about some people you knew that did go to Korea.

>> What did you … From what you heard in the news or what you read about, why do you even think the war was taking place in Korea?

>> Number one, I was quite young when I went in the army. I won’t say my years but quite young. And my brother served in World War II. So when he came home, even before he came home, my friends, myself, I grew up in a sugarcane estate. And we were practicing … I was young. Marching, stick my broomstick over my shoulder, up and down the estate. And so, Danny came home later on in the ’40s, and that was my motivation. These guys coming home. I remember distinctly when the war was over, my brother was serving in the Hawaiian island, and he came home that evening around 10, and one of these military trucks came into the estates and back up to our house, and here jumped a guy with his duffel bag and his uniform, and I remember wearing his cap and wearing his boots and things that I saw. So I was really conditioning and ready and really wanted to go join the service.

>> Joining the service, but what do you think was going on in Korea?

>> Even though you could maybe die?

>> That wasn’t in my mind. When you’re a young man and 16, that type doesn’t cross your mind, at least it didn’t mine.

>> Well, then you’re very, very fortunate, and God blessed you because I’ve met with many veterans who, at age 16, 17, 18, like you, they didn’t think they couldn’t possibility die in a war, but they saw a lot of their friends die.

>> Yes. Well, I served with a gentleman in Korea. A buddy of mine, same squad, Bumbebaho, Clarence, and he went to Korea. He made it through, but he was the first Virgin Islander to die in the war in Vietnam.

>> After Korea, yes. He went to Korea. He was a real solider, gung ho. Bumbebaho. Yup.

>> And he came back and he shared some stories about the war?

>> Were you born in Virgin Islands?

>> I was born right here in Saint Croix.

>> Mm. Tell us a little bit about, yeah, Saint Croix and being a Crucian, right?

>> By the time I volunteered for the service we were citizens. Oh, sure. Citizenship came some time … I’ll have to check on that, but I know we were US citizens because the reason why I say this is that in the ’40s, when my brother and all those went to the war, there was a result of making an act by Congress and making the draft applicable to the Virgin Islands so that they can go. So this was in around ’43 or something like that. We were a citizen some years before. Yeah.

>> I suppose there’s a lot of improvement. Like I said, Virgin Islanders was actually serving the military World War I. Okay? A guy by the name of Ludwig Carrigan, he was in World War I because what people was migrating and going after their transfer from the Virgin Islands. And people, and even before people had went to the states and lived, you see? So he was experienced with the Virgin Islands, but he was in New York at the time, And he was in World War I. Here on the island after the transfer in 1917, the United States navy got young people to get into the service, make it possible for them to volunteer for the service to form the first Black naval band right here in Saint Croix. I’m talking about after the transfer. Right? I knew people that joined, I think, it was 1919, 1918. One of them comes to my mind because he was my friend, August McKay, and he died. He was 97 year old. Matter of fact, I wrote a story of him in one of my book. Another guy is Peter Tolung from here, and many more that was about … I had to be close, about 20, and also from Saint Thomas. You ever heard about Alton Adams? Do some research on him. He was the band leader. Matter of fact, his picture is in the museum in Washington D.C. I saw it.

>> You mentioned you wrote a book?

>> What kind of books? I would love to read them.

>> Well, I first … Poetry is my first love. I’m a retired prison warden, and I started writing poetry 1 year before my retirement in 1984, and then, it turns into short stories, interviewing folks. 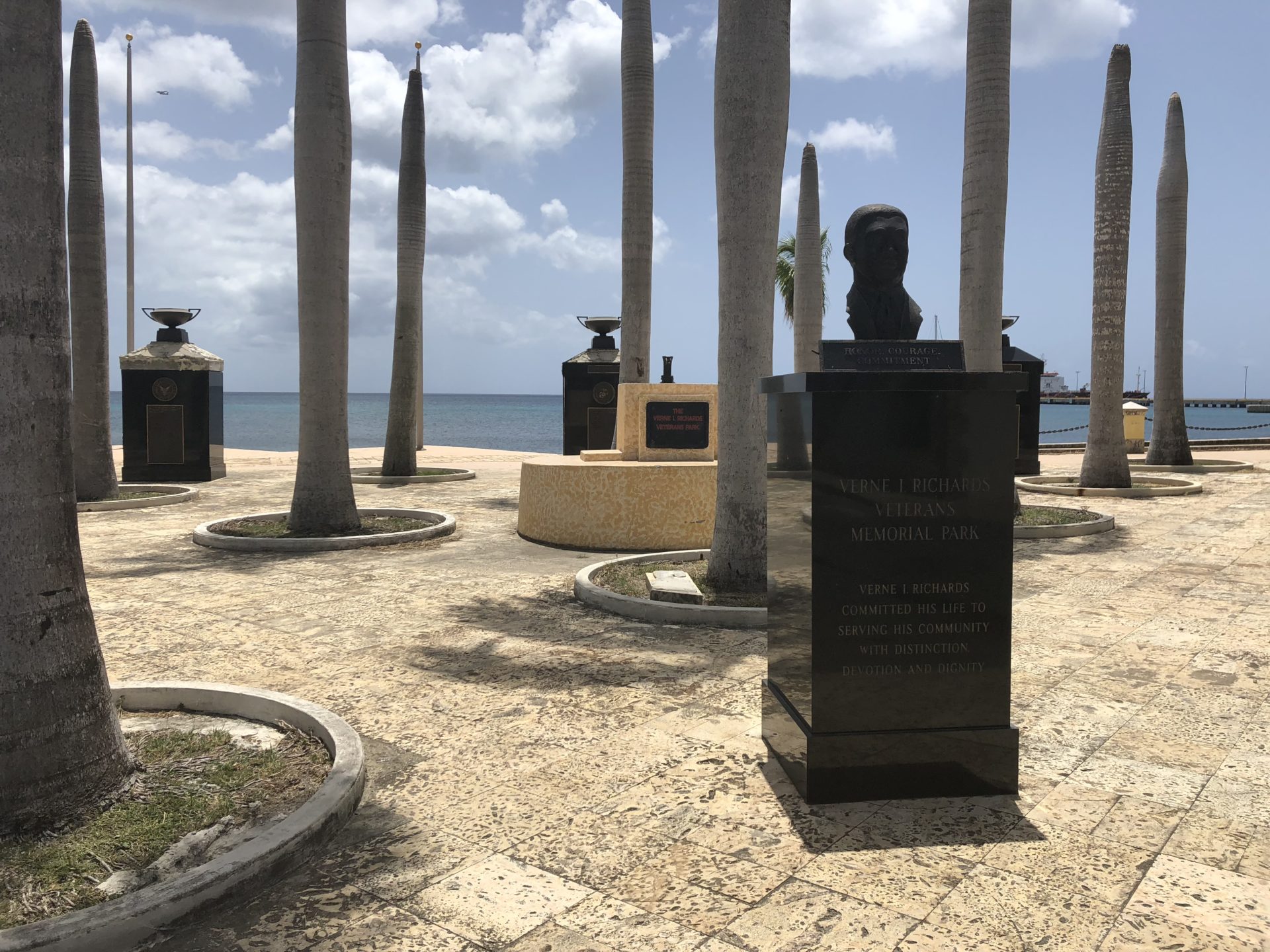