>> …threat. I’m Norman Lee. You want to know when I was first in Korea, October 1951, flying from an aircraft carrier from the Royal Australian Navy, flying Firefly aircraft. Our task was interdiction, which meant we had to keep all the roads closed, and our weaponry was bombs, so we did a lot of bombing of bridges, et cetera. Interestingly enough, we found that you can bomb a bridge, straddle it, and the bridge is not damaged. Am I going into too much technical detail here?

>> No. So we decided to do low-level bombing with delay fuses, a 27 delay between the bomb hitting the ground and exploding, four aircraft. Me, the last aircraft in, I had to get in within 27 seconds. Obviously I did because I’m still here. Interesting things, we operated out of Guri, the carrier, out of Guri and Sasebo. We alternated between the two. We were on patrol for 10 days in the Yellow Sea. We alternated with American aircraft carriers. We were there for 5 months.

We relieved a Royal Navy aircraft carrier, and it came back and relieved us. It went down to Australia to be refitted. Highlights? I remember taking a group to Iwakuni to do a test flight on an aircraft, and on the way back, we were still in uniform because it was still wartime. We stopped at a Russia bar, and it was still dead flat, and we wandered around. We were looking for somebody to get something to eat like today, and we came across what we thought was an eating place, and we walked in, and obviously we weren’t very welcome, and it turned out that it was a private place, and then they realized we’d made a mistake, and then they welcomed us. They took us out the back, sat us down, and we had a cow sukiyaki as they called it, lots of acai beer, and then they put us onto the train back to Guri so good fun. Highlights? We went through a terrific typhoon, Typhoon Ruth. We lost aircraft off the flight deck because of the weather. The flight deck is 44 feet above the water level, and we lost a tractor off the front of the island and a boat from behind the island, so you can see how the waves at 44 feet were [INAUDIBLE]. The ship rolled 35 degrees, which is a lot of rolling in an aircraft carrier. What else can I tell you? Ask me a question.

>> Do you remember seeing some of the civilians?

>> Oh, yes, Korean. Interesting, I took the mail from the ship into Gimpo, and as a result, I went into Seoul. In Seoul, there wasn’t a building standing that didn’t have a hole in it, and the only bridge was in the river, in the Han. And when I went back about 15 years ago, multistory buildings and, what, 17 bridges across the Han now, very prosperous country. Two of my course mates were shot down during the Korean War. They both survived, very interesting. We lost 10 aircrafts, shot down. We lost three pilots killed. We incurred 90 instances of damage to aircraft in the aircraft fire. Anyway, when it came time to come home we did. We arrived in Australia and as if we had never been away. There was no … not like Vietnam where there was lots of anti. It was just the flow. We’d never been away, and we went straight into peacetime routine, and that was that. What more can I tell you?

>> We had destroyers and frigates, surface ships, operating all the time, and you would have seen pictures of the Thames in London. There’s a cruiser sitting in the Thames, HMS Belfast and Tobruk. Tobruk was an Australian destroyer, and Belfast was a Royal Navy cruiser. We were on the east coast doing shore bombardment where the pilot directs the fall of shot from the ships. All right? Are you still with me?

>> Good. Stay with me. Anyway, exchange of call signs between the ship and myself. Went ahead shooting. I made corrections to their fall of shot, and there was a problem. The ship had to come closer. Something was awfully wrong, and it turned out I was correcting the shot from the destroyer on the cruiser’s fall of shot.

>> White phosphorus, Willy Peter, does this make sense to you?

>> Anyway, about a year later on back in Australia, we had the Navy officers out to lunch, and their gunning officer said, “You’re an aviator,” and he said, “I’ve met the biggest idiot aviator in Korea.” That was me. Good story.

>> Now, during the talks, truce talks, we were on the east coast at Hungnam, which is on down the east side. We normally operated on the west side. And the word went round the truce talks were almost going to happen, and we were given a code word, and the code word was Brandywine. And if we heard the code word … We were flying. Heard the code word Brandywine, stop bombing, rocketing, whatever you were doing because the truce had been declared. And the joke went around the squadron that if you had just dropped a bomb, you’d better duck down and grab it before it hit the ground. Joke. We need to worry because it was, what, 18 months, almost 2 years before we finally had a truce. Yeah. Now my reaction to being there? I could remember one time forming up, flying back from a bombing mission on my leader, and I suddenly had a thought, “What am I doing here 10,000 miles away from home bombing these people?” And that was it. I mean, anytime I ever thought about it … When you’re 21, it doesn’t matter, does it?

>> So have you thought about that question now?

>> And you stayed in the service for a long time until you retired as a commodore.

>> … which is good. So I was both an aviator and a seaman officer.

>> Since you were with the Navy for a very long time, what do you think the significance of Australia’s Navy was in Korea?

>> Not that great really, the surface ships, I mean. The carrier, yes. We certainly … We did as good as what the Americans and everybody else was doing, including 77 Squadron. But the surface ships, all they could really do is gunfire ashore. It wasn’t a great effort. Well, I better clarify that. They were there from the beginning until the end. We rotated ships through in support as you would do, and some of them were pretty heavily involved, but not like the second World War.

>> Of course. The Second World War was a little different.

>> It was a little more grander in scale, but it is true that the Korean War was a united effort of more different people from different continents, and I would think that Australians, coming from Oceania, as you said, 10,000 miles away and yet still participating in this war, you may have wondered why. But if you look back, it was really … You defended the freedom of South Korea.

>> Well, I think, looking back on it, we very much recognized the United Nations concept, and if the United Nations said we’ve got to go to war, we went to war, and it really was as simple as that. That’s my opinion. What do you think?

>> Yeah, I became very sympathetic to the South Koreans.

>> The Korean War was a legitimate action. There’s no question about that to me.

>> Well, it stopped the threat of communism all over in that region.

>> You can tell for sure. I mean, there’s a stark difference between North and South Korea. You know what you fought for. It’s one country, I mean, one people, but the Allied helped South Korea and took down North Korea. I hope that you’re very proud.

>> On the flight deck of the carrier, having started the aircraft, I couldn’t get my gun sight to work. No gun sight, and I fiddle with it, and I change the bulbs in it, and still no gun sight. And off I went, and we came across some Chinese, and all I could do was sort of point and spray, right? Right back on board the carrier, and I was sitting in a little cafe behind the island with my air group commander, the boss. There was a knock on the door, and a petty officer came in and said, “[INAUDIBLE] Lee, we’ve found out what’s wrong with your gun sight,” and I said, “Oh, good, what? Bad maintenance?” “No, no, no, no, sir. The brilliance was turned right down.” Good story? Naughty, naughty it was, too. 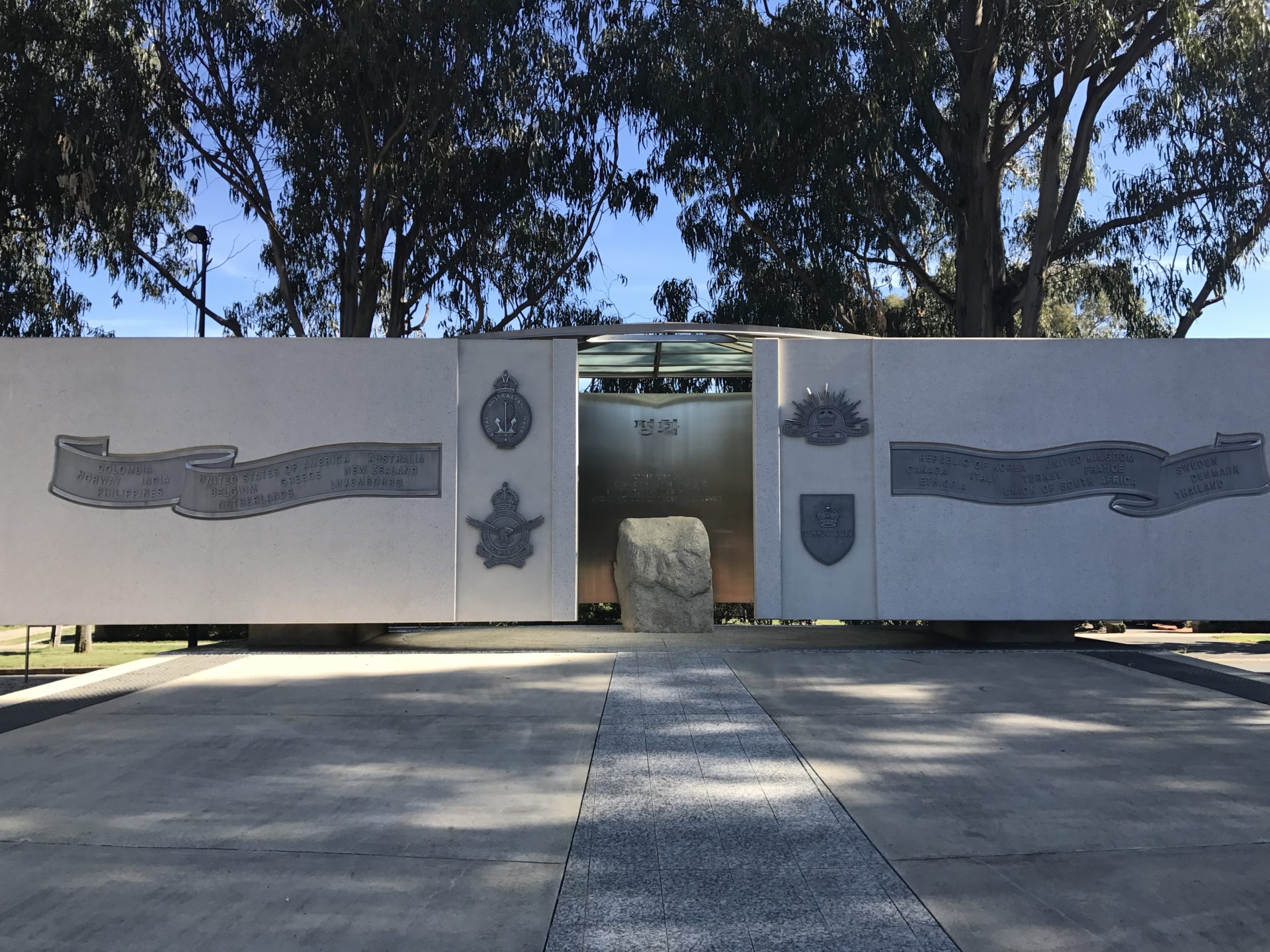