Skip to the content
>> My English name is Bill Kramer. I'm born in Amsterdam, 19 December 1934. I joined the Navy when I was 16. After 2 years, then I was 18. I joined a ship for Korea. The Dutch Navy had six ships, always 1 year in Korea. We arrived just after peace fire, so I don't experience the shooting, but we did always patrol, checking for [INAUDIBLE] assistant to aircraft carriers and so on. But we had it a lot better than the ships before. We go regular to Japan to refuel food and R&R for the crew, rest and recreation for the crew. We go [Indistinct] and so we had a wonderful time in Japan, and in Korea, I really was only 9 days. Then I was ashore. We were ashore two times in Pusan and one time in Imjin. Imjin is the harbor of Seoul. Pusan was, during that time, nothing, only some American nationhood a couple concrete buildings but were nothing left. I was last May in Pusan, and I saw a wonderful, big city, and I was in 2008 in Korea. I was not to Pusan but before to the 38th border, and we saw just [INAUDIBLE] back in Korea, and we saw a nice train station that is built for connection from Pusan, Seoul to Paris, yeah. North Koreans don't allow to make railway complete, but impression of Korea is very, very high, and the people is so nice and friendly. I have no words for it, so don't ask me. It's too difficult. I was back in Holland in 1954, and I got an accident in 1957 and a medical discharge in 1960, so that's my story. >> Well, first of all, you must have been very proud when you went to Korea because you were part of Korea becoming what it is today. All right. So thank you very much, and not a lot of people know that the Dutch stayed after the war. People think, "Oh, armistice, and everybody go home," but that's not true. >> No, no, after my ship [INAUDIBLE] another ship that arrives in 1954 until 1955. >> Yes, a lot of people don't know that the countries that participated stayed until 1955. >> But from the Navy, only two men are died, one quartermaster. It's in very heavy storm overboard. He went to save one of the lifeboats, and he was not fastened and get overboard. They never find him, and a radioman in Korea was calling ashore, little, little boat to pick up a Korean officer that was wounded to give him medical help, but the engine of the Dutch boat [INAUDIBLE]. It was English, and it makes the same noise as not Korean fishing boats, so it was foggy, and it starts fire, and the boat had a noise, so it was friendly fire, okay? >> Maybe you can tell about what your experience, the revisit from last year with your ... >> Yeah, yeah, I was ... >> ... last experience with Korea. >> ... Back in 928 last year again, and last year, it was very special because the Korean government are allowed that people who died here in Holland that all Korean veterans that are cremated can go back to Korea and go to Pusan International Cemetery. In Pusan, the cemetery is the only in the whole world what is from the United Nations, and so [INAUDIBLE]. >> [INAUDIBLE] >> Next year [INAUDIBLE]. When we arrive on the air field in [INAUDIBLE] and complete guardian watch [INAUDIBLE]. After that visit, we got a DVD that a whole studio and DVD that pictures only about 700. He was there, and he was there and I. >> When? November? >> No, May. >> May. >> May. >> May. >> [INAUDIBLE]. >> Good weather. >> Good weather, yes. Monday, it was raining, raining, raining, and the director of veterans affairs told us, "Don't worry. At 2 o'clock when you arrive at the cemetery, it is dry." We call it [INAUDIBLE]. Rain, rain, rain. We arrive, ding, dong, 2 o'clock. The rain stops. >> Yeah. >> It was beautiful, yeah. >> It must have been very emotional when you went to the cemetery. >> Yes, and what my buddy told about South Korea and North Korea, we were the last soldiers in Seoul, and [INAUDIBLE] people walk around and a big sign, "What do you think about North and South together?" So we signed it and yeah. >> [FOREIGN LANGUAGE]. >> Yeah, it was beautiful. >> Yeah. >> I am going to visit Korea, Pusan, the United Nations cemetery last after I go everywhere around the world, and I know that there are many Dutch soldiers. >> One hundred twenty-four. >> Are they all there? No. >> Yes. >> Not all in the cemetery in Pusan. >> No. One is in Singapore because he died on his way back to Holland. >> That's [INAUDIBLE]. >> Two men are missing. >> How many are there in Pusan cemetery? >> [FOREIGN LANGUAGE]. >> All of them went back to Holland. Their families took them back to Holland. I don't know exactly how many. >> The Americans are all back. >> Yes. Americans always bring back. >> Yeah, yeah. >> But I learned that recently, some of the Dutch veterans have requested that they be buried at the United Nations cemetery along with their comrades, so I am looking forward to visiting them and paying tribute. I think it will be very emotional for me. >> I think so too. Yes. You speak Korean? >> I do. >> Oh. >> I will be there in May. >> Because in museum where I was this afternoon, I saw Korean boy that works [INAUDIBLE]. He's working by the Dutch police, and he goes back to Korea 2 years ago. He said it was so difficult because I'm a Korean, but he arrives in Netherlands, been there 6 months, so he don't speak one word Korean. >> But he is Korean. >> He is Korean, so it can be happen. [FOREIGN LANGUAGE]. >> My uncle adopted two Korean girls, and they had restaurants [INAUDIBLE] here in Holland, Korean restaurant. >> Really? >> Yeah. Well, they are my nephews. >> Oh. I told you, my uncle. >> I know. >> I told you. >> I know. It's permitted? >> Oh, yes, please. >> Thank you. 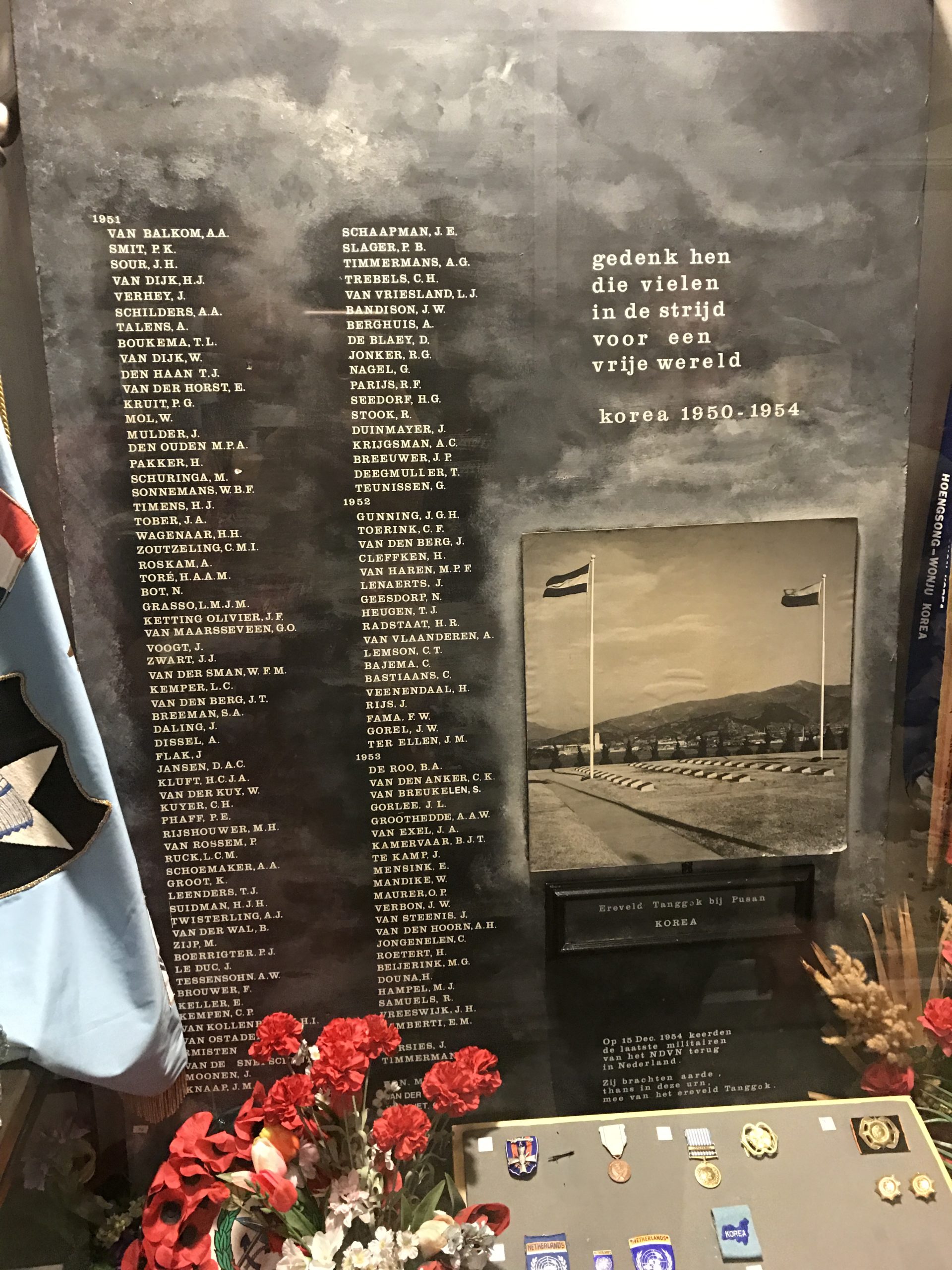