I am now here at the newer Korean War Memorial in Guam.

This is, as you can see, a very central [Indistinct] governor complex.

Ocean in the back.

It’s really beautiful here, and we just laid flower honoring all 19 soldiers who died, you know, in the Korean War, and there’s still one accounted for.

So I’m going to actually take you to here, but … Oh, hey.

So this beautiful young lady … We’re going to go to the shade … is the granddaughter of a Korean War veteran, okay, and I want you to … So she’s kind of like my cousin, but I want you to tell me what it means to you that you’re here to lay the flowers and to kind of honor your father’s memory, grandfather’s memory as well.

First of all, what’s your name?

>> My real name is actually Anna.

But my grandpa died when I was around 7, so I didn’t really know him that well because I was really young, and I really didn’t know anything about him, like, as he fighting, but ever since my grandma was in the Korean War veteran organization, I’ve been following her around to all these events, and it just makes me so proud of him and to be able to honor him even though he’s already gone.

>> And so her grandfather earned a Purple Heart, one of the two Guamanians that did, and so I said, “You know, earning a medal doesn’t make any veteran’s life more precious but that she should be very proud.”

Also I want to point out that same memorial is in [Indistinct] South Korea.

It was build on October [Indistinct] October 5th in 2000 at the same time on the same day in different locations, so that’s very meaningful.

I also have somebody from the governor’s office here.

I want … Can you say hello over there?

>> … is from the governor’s office to represent and say hello on his behalf.

Thank you so much.

Veterans issues are very important to the governor.

He sent me to represent him.

We are very appreciative of the efforts the governor has seen in the families and the veterans for many years on Guam, the Korean War, the Vietnam War.

We have multiple veterans present here, and we are so grateful for their sacrifice which is inestimable.

I couldn’t even find words to describe.

Myself, I am a younger person.

My great-uncle, Owen Bowman, fought in the Korean War.

>> He was a veteran himself.

>> And it’s just an honor to have an event like this for our veterans to celebrate them and to recognize the incredible sacrifices that they have made.

>> So thank you for having us.

Thank you for coming.

I’m going to give you the …

>> We honor his service as well.

I just want to point out that I learned today from Congresswoman [Indistinct] office that there are 2,400 Korean War veterans currently living in Guam, so that means at least 5,000 went from this small island.

I’m going to show you my grandpas and grandmas.

Or you say [foreign] hafa adai.

>> Some of them already went because we’re going to go to another cemetery, but I’m going to end with this sight.

Do you see the beach there or the ocean, the sea?

It is so beautiful, and I also want to end with a shout-out to god.

It was forecasted to rain, okay, the whole day today, and I don’t know.

It is sunny and bright.

It’s a little bit too hot, so god is always good.

Thank you, everybody, for joining me on this journey, and I am just so grateful, and yes, when in Guam, you wear what Guamanians do.

Thank you very much.

… grandfather, so it makes us kind of cousins because we know I call your grandfather my grandfather.

>> Yeah, and not that a medal makes a veteran, his life, any more precious.

However, your grandfather did earn a Purple Heart, and I thank him for that, and I’m sure you are very, very, very proud.

And we were waiting for you, General.

Well, since you’re continuing the legacy fought by the veterans, you know, you’re defending our country and really the freedom.

Could you say briefly what it means to follow in their footsteps?

>> The sacrifice that [Indistinct].

Remember the families that made a sacrifice, too, so thank you.

So I know I spoke at length yesterday about just … For those of you who weren’t there yesterday, I’ll briefly say why I’m here.

Well, basically, I’m here to say thank you to those who paid the ultimate sacrifice, but I wanted to meet you …

>> … you know, meet you and let us know that your service and that of your husbands were not in vain.

So I wanted to travel to every single country [Indistinct] veteran, so I visited 27 in total and then, because I went to the 21 United Nations plus the other side, I also went to … Now this is where it’s very important.

It’s very local and personal for me, so having worked for a Black prominent member of Congress and being a young Asian female on the mainland, I’m a minority of minorities, so I’m very conscious of those who [Indistinct] society may not think are … You know, we’re not newsworthy.

Sometimes people don’t even think about the territories, but I was very, very … In Congress, the Guam representative, Congresswoman Bordallo, and her and her staff, they were very active, so I knew about Guam.

I knew that there were many veterans here.

I knew that there was a significant population, so I said, “No way, Jose. I am not, you know … I’m not forgetting those in the US territories.”

I have to admit, it’s a little bit far and difficult to get here, but it’s worth it because that’s how much I want everyone to know how much I care and how much you [Indistinct] even more remember because I think it was even more difficult for you in the smaller island to go and fight, you know, so I’ve been to the US Virgin Islands and Puerto Rico.

Now I’m in Guam, and after this, I’m going to the American Samoa, and that will be my last, last, ultimate, last stop, but yes.

So here, I’m simply here to say thank you, and I know all of you have the pin that I gave yesterday, right?

I brought it for you.

So again, this is a representation of my heart and love for … 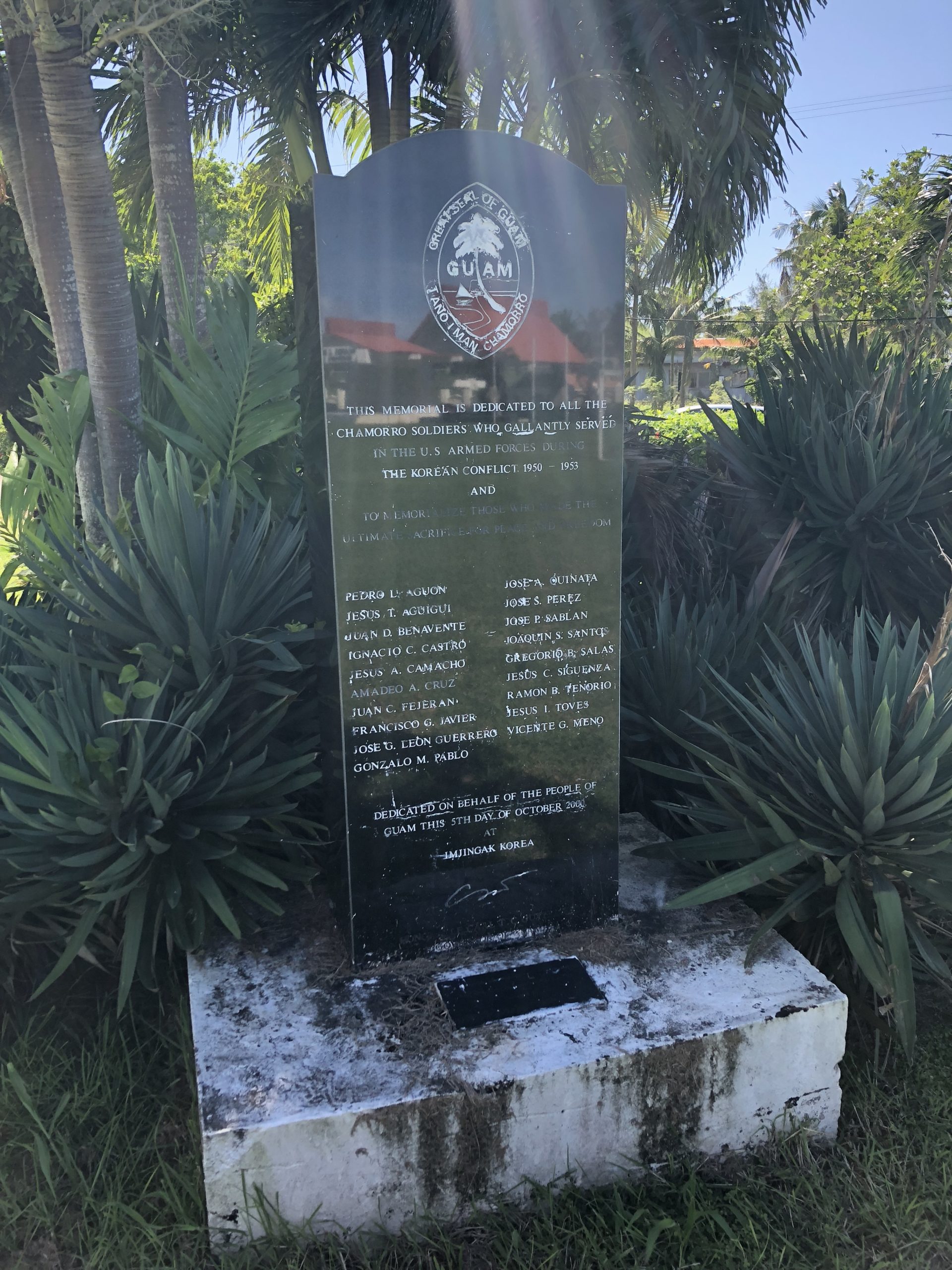