>> Hello, everybody, from Saint Thomas, U.S. Virgin Islands. So you thought that I would go after July 27th. Not really. I’m here in this beautiful island to honor Virgin Islanders who went to fight in Korea. So we just laid a wreath here, and this is the Franklin D Roosevelt Veterans Memorial Park, and while it does not have a Korean War memorial yet, it has a veterans memorial honoring veterans from all five branches. We, of course, laid the wreath here, and I am going to take you to some of my Virgin Islander grandpas, so come on over. Of course, that is the Virgin Islands’ flag, and behind me is the government building. So just to give you a history background, Virgin Islands became part of the U.S. territories in 1917 because, of course, America wanted to ensure that the Caribbean was not going to be under German influence. And it’s a little bit … If you really think, it’s amazing that shortly after Virgin Islanders fought in the Korean War for a country, their newly adopted country, for a country that they didn’t know, Korea. And so here we … Look at this. The Lieutenant Governor was here. Thank you, Lieutenant Governor Potter, who was a veteran himself. Congresswoman …

>> Representative was here. She came to represent. But … And we just ended the ceremony, so they’re eating lunch, and they’re watching a video about the Korean War. But … Grandpa, can you say hello to the people? To say … These are my grandpas, Virgin Islander grandpas. My grandpa, Larry. Oh, Grandpa Aubrey, perfect!

>> So Grandpa Aubrey is probably one of the most knowledgeable Korean War veterans that I’ve met and had the honor to meet, and he’s a Virgin Islander. However, he fought with the Borinqueneers. Of course, you all know by then …

>> Yes. You assisted them, but he also has a Congressional Gold Medal because, of course, the Borinqueneers were at war …

>> Exactly. And could you just as a Virgin Islanders …

>> To have participated in this effort to defend freedom, not just for Korea, but halted to communism, spread of communism around the world. What does it mean? What does it mean to you after almost 70 years for me to come here and thank you and just seeing your colleagues?

>> Well, it’s built a different level. What we did, maybe how the people of color in the military to be better treated because they saw that we had discipline. We could follow orders. We were well trained. I was the first person of color accepted to the Southeastern Signal School in Fort Gordon, Georgia, in 1952, and it was very intense course. It was the longest in the [INAUDIBLE] course at the time because 34 weeks long. I was perfectly trained in every type of communication of that time to operate, to repair and restore, and that’s what I did in Korea to help you people.

>> I’m not surprised because he is extremely intelligent, and I’m really serious.

>> The father has blessed me so much.

>> You are blessed with intelligence, and so thank you for making it … coming here, not just today, but to share with me the stories so that I could pass it on and share with other people, and so that your legacy is not forgotten.

>> Yeah. I always try to remember those who were with me and [INAUDIBLE] that didn’t come home and those who came home and were disregarded and never helped and just fell by the sidelines, many of my friends and [INAUDIBLE]. Nobody helped them. I suppose that’s the cold Korean War. I was blessed. I never killed anyone. I was trained. I helped my fellow men as much as I could, and I loved the military. I loved it. I was drafted, and then I re-enlisted for 3 years.

>> I will never say anything about the military.

>> … if he’s going to be successful, “You must listen, learn and improvise,” and at times he must become a chameleon.

>> Mm, that’s very good advice, everybody. But just want to stop here and say that he mentioned those who didn’t come home like he did, and that is 78. Okay?

>> But those who came home were never treated well, many, many.

>> Now remember this was from the three Virgin Islands, not only St. Thomas.

>> I think the most that actually never came home are from St. Croix.

>> Again, they used them as cannon fodder. You know what that phrase means?

>> Cannon fodder is when a leader in the military just wants … He needs someone to die to protect more people.

>> And I do want to just say that, that is why war is something …

>> … senseless, and we need to continue to defend people. Ooh, it’s raining, so I’m going to go. I want you to shelter, okay? Thank you so much.

>> They get some food also.

>> My name is Bubba Benjamin.

>> Okay. Where’s the other Benjamin?

>> Why are you guys here? Can you just start with that? So we’re going to come a little closer because it’s so loud back there.

>> We came to support our grandfather.

>> Well, we’ll go over there only because we don’t to block the food. Okay. You came to support your grandpa. Who’s your grandfather?

>> My grandfather is [INAUDIBLE].

>> Okay. Can you honor him by explaining to them why he was here?

>> He fought in the Korean War.

>> He wasn’t even around then. You know what I’m saying?

>> We wasn’t even a thought or anything.

>> He fought for us, and we wasn’t even in existence yet because my mom and dad go back home. He was all the way across the world fighting for America.

>> I know. That’s kind of cool. Do you know … So I called him my grandpa. You heard, right? So technically we’re cousins. Right? Yeah. So I have my new … Ooh. Did you guys do this, red, white and blue?

>> My Benjamin cousins. Yes. So thank you for your grandfather’s service, and I hope that you carry for the rest of your life that pride that he served and helped somebody like me to come in existence, not only you, but me, right, and all the Korean people, and we’re very grateful for your grandfather’s service. So I would be remiss if we didn’t show you Mr. Benjamin, so I’m going to take you to him. He doesn’t know I’m coming. Okay. It’s really cool that he has his entire family rolled with him to honor him. Grandpa? Can you just come and wave? Come this way. Sorry to disturb you while you’re eating, but I wanted everybody to see your handsome face because your grandsons just talked about your service in the war and how proud they are.

>> Mm. But I am so glad that you made it back, that you are here, and you have this beautiful family that you raised, who love you and who respect you and are so proud of you as I am grateful to you, so thank you.

And last but not least, look at this. “Proudly we served Virgin Islander Veterans of the Korean War.” Isn’t that awesome? So I just would like to say … I’m going to go this way. I would like to show everybody, ta-da. And give a shout-out to our commander from the American Legion [INAUDIBLE] 90, fearless leader. She called the Lieutenant Governor her younger brother. I said, “Oh, my god. I thought you’re his younger sister.” She looks really good. I’m going to later ask her for her secret, how to keep young.

>> Stay happy. I think so too. And I’m staying grateful and happy. Yeah. I’m just so grateful to be here. That Alpine Security, [INAUDIBLE] Charles giving shout-out over there. I’m just so proud that you have organized and brought all of us here together on this day so that we could remember the Forgotten War and to honor the veterans who are sometimes too often not honored and thanked enough. So again, it was to my surprise I learned that there were a few more veterans in Virgin Islands. Not only 78 died. And that’s … Not to compare numbers, that’s more than Nevada and Delaware. So people back in the states, we sometimes forget the sacrifices made by the people in the U.S. territories. And so again, I am grateful to you. I’m grateful to Alpine Securities. I’m grateful to the American Legion Post and to the government of U.S. Virgin Islands for taking care of the grandpas. I am hoping that there will be a memorial, monument, dedicated at the veterans park to honor their service. So, Shumaro, this has been now an extension of my fantasy 70-plus, 70, 90-day journey across America because it’s my 92nd day, but the journey continued because the Korean War veterans must be remembered forever. So remember727.org. See you tomorrow. Bye. 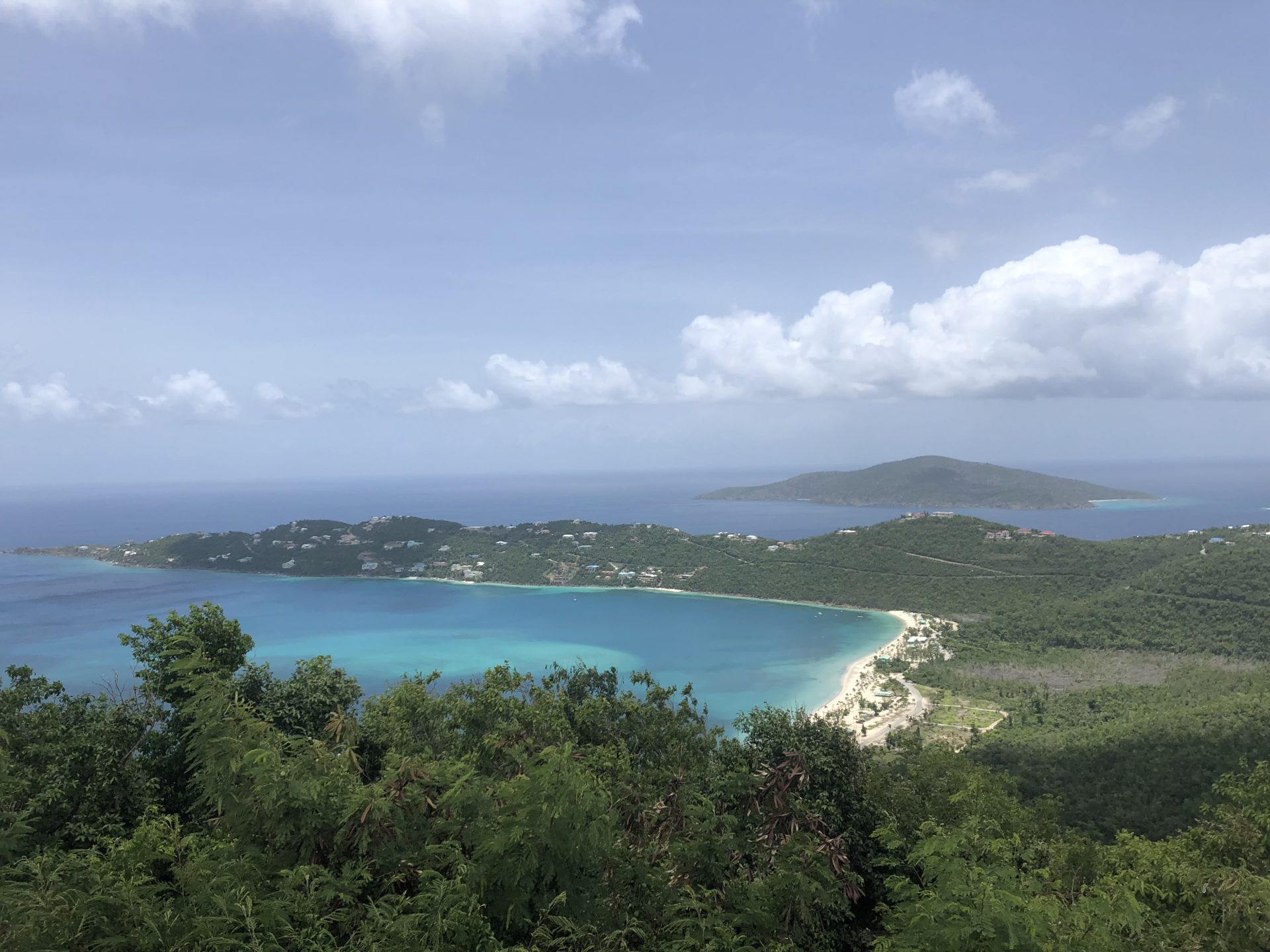