Skip to the content
>> Hi, everybody, from Paramaribo, Suriname. This is the Surinamese River, and I am going to take you to the Korean War memorial at this Independence Square. So it's very fitting today. I'm going to have to be careful because I don't want to fall into water, but today is Independence Day in Suriname, and that's why there's a lot of activities going on in the background. Suriname gained independence in 1975 on November 25th, and obviously today is November 25th, and they gained independence from the Netherlands. So the reason why I'm here in Suriname is because they were a former Dutch colony, and during the Korean War in 1950, the Surinamese, 115 of them ... Whoa! >> Watch out. >> Went to Korea, and two were killed. So you'll see over there, there is a memorial with three statues. Again, this is the Independence Square. And I was so happy because it seemed like obviously there's so many people here. It seems like a lot of people knew about this memorial. It was 2008 when the Korean government dedicated, donated money so that they could dedicate this memorial [INAUDIBLE]. This rain has [INAUDIBLE] a couple times throughout the day like a storm, so it's a little bit wet. So a Korean soldier, and this was erected [INAUDIBLE] monument in memory of Surinamese [INAUDIBLE] in 2008, June 25th. As you guys know, June 25th is the day that the Korean War started, 1950. So there's the beautiful Korean soldiers. If you look at them, they look a lot like the American soldier. If I'm correct, and I'll have to find out more, but the Dutch soldiers were attached to the 2nd Infantry of the U.S. Army, the Indianheads. That's probably why they're wearing, like, American uniforms. So I'll show you the [INAUDIBLE]. This side, so it basically says that it was dedicated to 102 Surinamese veterans, and like I said, two passed away. And on the other side ... Look, the [INAUDIBLE]. There are the names of everyone, and I am extremely excited because there are currently ... Among these, there are only three living, and so tomorrow I'll be meeting Mr. Gom and two more others, and we will be here in the morning to lay a wreath, so I am extremely grateful, and thanks to [INAUDIBLE] for filming and taking me around today ... >> You're welcome. >> ... and showing me this ... >> You're welcome. >> ... beautiful, beautiful country. I have learned so much from you, thank you, about the groups here, and I just wanted to quickly point out that the Surinamese are extremely diverse here, and I'll explain why a little later, but the flag has a star in the middle, and that star symbolizes the unity of all ethnic races, so ta-da. I'm wearing yellow to symbolize unity because I, wherever I go, pray for unity among just all of us, but at the same time, I keep praying for unity and peace between North and South Korea so that they become one Korea. So thank you, everybody. I will see you tomorrow. Bye. 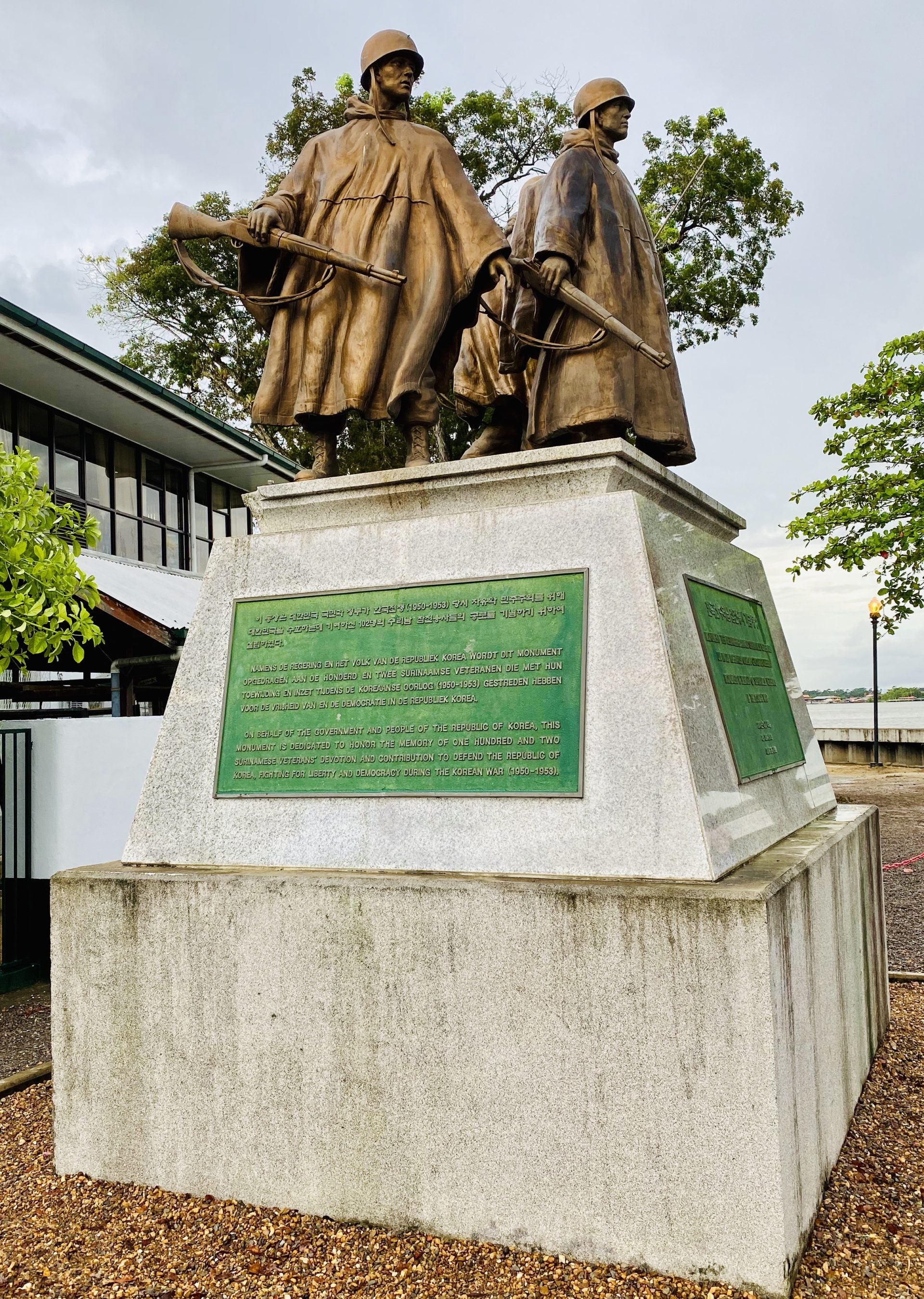